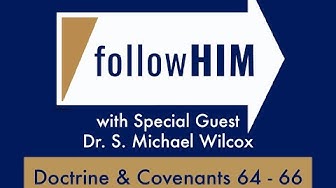 Have you ever struggled with forgiving others or forgiving yourself? Do you ever doubt if you can truly be forgiven? Join Hank Smith, John Bytheway, and Brother S. Michael Wilcox as they delve into Doctrine and Covenants 64 and discuss forgiveness. What did the Lord have to say about forgiveness and mercy to the early saints? Brother Wilcox teaches that a key to forgiving is to celebrate the good and forgive everything else--hatred can end only through love. Show notes: https://followhim.co/ Facebook: https://www.facebook.com/followhimpodcast Instagram: https://www.instagram.com/followhimpocast Enjoy this podcast? Download the Our Turtle House app and access thousands of hours of fun and inspirational firesides, talks, devotionals, and podcasts (including the follow Him podcast) that your whole family will enjoy! Get the app here: http://turtle.link/app ----- 0:00 Intro 01:00 Introduction of S. Michael Wilcox 02:42 Background of Doctrine and Covenants Sections 64-66 05:30 How the JST provided revelations that became our Doctrine and Covenants 10:19 How the First Vision applies to these sections 14:15 Dr. Wilcox loves the Joseph of the Grove 17:12 The Revealer is merciful and forgiving 21:09 Eastern religions deal with suffering--Christianity, Judaism, and Islam deals with sin 25:10 The Lord tells us to stop “seeking occasion” to find fault with Joseph 31:28 The Lord forgives and commands us to and to become Zion 37:48 Discussion of the Unforgiving Servant 46:43 The Church is full of “Pink People” 48:53 Not Everyone is to rush to Missouri 54:22 Discussion of the Laborers in the Vineyard 56:11 The Lord loves a “willing heart and willing mind” 59:45 Dante’s Two Rivers in the Divine Comedy 1:04:50 What the word judgment means in the scriptures #followhimpodcast #comefollowme #doctrineandcovenants #forgiveness